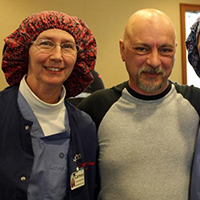 Robert Ganson had been feeling bad for about a week and saw his physician on July 9, 2014, with chief complaint of coughing with productive green sputum, ear ache, muscle aches, chills and a documented temperature of 101 degrees.  He was tested for the flu and given a prescription for Azithromycin.  He then developed a sharp knifelike pain in the left chest radiating into the left shoulder that had been waxing and waning for 2 days lasting up to 30 minutes at a time.  He related this to his flu like illness.  On July 11, he went back to the physician office and described his symptoms.  An ECG was obtained that showed ST elevation in II, III, and AVF.

Robert was given ASA and SL NTG and Higginsville EMS and Centerpoint Medical Center were alerted for transfer.  LifeFlight Eagle was alerted for rendezvous with Higginsville EMS for transport to Centerpoint. Within 64 minutes of patient contact by Higginsville EMS, Robert arrived at Centerpoint by LifeFlight Eagle.  He was greeted in the emergency room by the cardiologist and CVL team, quickly assessed and taken to the CVL, without ever leaving the helicopter gurney. Angiography showed 100% occlusion of the RCA.  He was treated with balloon angioplasty and drug eluting stent.

Robert began outpatient cardiac rehab with goals to get back his pre event state and to lose weight.  It was also discovered that he had elevated triglycerides.