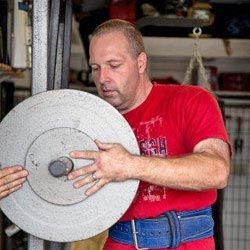 That was nearly a year ago. It was difficult for him to sleep and even simple things like mowing the grass or getting out of bed became unbearable.

“I was watching the quality of my life slowly erode,” said the 41-year-old police officer. As time went on, it became more and more difficult for him to remain active without experiencing hip pain the next day. Despite a limp, he continued to work as a police officer – even pursuing suspects on foot – but admits that at times he felt physically and mentally at a disadvantage.

It reached a breaking point one night last November when a deep burning sensation in his hip once again prevented him from sleeping. “I can’t take this anymore,” he remembers telling his wife, Kimberly. He credits her with helping him to see a doctor.

After meeting with Dr. Robert M. Drisko II of Drisko Fee & Parkins Orthopedic Surgery, Brownlee learned that he had bone spurs and In-Stage Osteoarthritis in both hips.

“He told me my hips were worn out,” said Brownlee, knowing he likely would need hip replacement surgery. To his surprise, Dr. Drisko wanted him to meet with one of his associates, Dr. Jeffrey Krempec, who was performing bi-lateral hip resurfacing on male patients.

“Blake was a good candidate for hip resurfacing because he is younger and has strong bone around the hip joints,” Dr. Krempec said.

Hip resurfacing is similar to hip replacement in that the worn surfaces of the hip are resurfaced with man-made materials. With hip resurfacing, far less bone is removed. During the procedure, only the femoral head (where the leg joins the hip) is reshaped and resurfaced. The femoral bone is fitted with a metal cap. The hip socket receives a metal cup.

Brownlee said he appreciated the time Dr. Krempec took to explain to him the differences between the two procedures and what he could expect long-term. Brownlee had his right hip resurfaced on Jan. 4, 2012. His left hip was completed on July 6. He underwent physical therapy and returned to work in eight weeks after each surgery .

“Dr. Krempec gave me my life back,” Brownlee said. “I feel young again. I’m thrilled I had it done.” Brownlee says he is now pain free and regaining his full range of motion. He’s back to lifting weights – something that he truly enjoys.

Asked how he feels today, Brownlee said “I don’t feel anything and that’s great.”